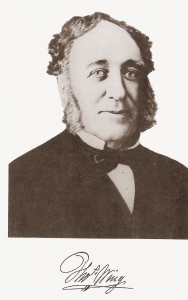 In 1837, Captain Thomas Wing is the first to charter the harbour of ‘Hauriri’, which is later called Ahuriri.

In 1846, Alexander Alexander is the first European trader to settle, building a store and starting two businesses, a shipping company and a bacon curing venture. By 1851 the little port is a bustling place of trade boasting three hotels which were often full.

On 10th March 1855, Napier is declared a “Port of Entry” for customed goods. It is at this time it is given the official name “Port of Napier”.

East Pier was built on the site of an old fish factory in 1992 by its present owners to be a top quality waterfront bar and brasserie and over the next decade established itself as the areas leading and most popular venue.

Since the turn of the millennium East Pier has also earned the reputation as one of Hawke’s Bay’s leading wedding and conference centres attracting large glamorous weddings and regional, national, and international conferences on a weekly basis.

Dave HalsteadManaging Director
Dave Halstead is co-owner of The East Pier Hotel and is responsible for the day to day management of this magnificent facility. He joined East Pier at the end of 1998 and over many years has been instrumental in the transition of the award winning restaurant into one of Hawke’s bay’s leading wedding and conference venues.

He has overseen the major redevelopment of the business into the magnificent hotel it is today and Dave works tirelessly to ensure that every visitor, whether it a corporate event, wedding or casual drinker/diner has all their expectations exceeded and has them returning back time and time again.

Dave’s door is always open and he would love you to pop in, say hello and introduce yourself next time you visit.

Vanessa WallisFront of House Manager
Vanessa Wallis has been leading the behind the scenes team at East Pier for over 20 years. Her role in the new hotel sees her responsible for all administration, front desk and housekeeping staff, a role that certainly keeps her busy.

Feel free to contact Vanessa any time if you have any suggestions or comments to make regarding any of these areas – she would love to hear from you.

We use cookies to ensure that we give you the best experience on our website. If you continue to use this site we will assume that you are happy with it.Ok